In Part one we skimmed through the prehistory of the modern concert xylophone. And ended with the quaint conclusion that when it reached the high tide of its popularity (to date), the xylophone was not, in fact, a xylophone.

Well, I am just having a little fun with the view of Paul Jefferies that xylophones

1) need thick bars to give a staccato sound

4) must not be "piccolo marimbas".

Thick bars. Going back to the strohfiedel, the bars are rather small -- certainly narrow, and not particularly deep (the modern reproductions by Lefima have bars 30mm by 20mm). I seriously doubt that early European concert xylophones were any more massive, and they were acceptable to Strauss, Stravinsky and Bartok. It's likely that heavier bars began to appear as the Deagan and Leedy companies sought competitive advantage in the vaudeville era in the USA. The most steroidal xylophone ever was possibly the Deagan de Luxe, with bars 2 and 1/4 " wide and 1 and 1/4 " deep (57 x 32 mm). Here it is in close-up with some namby-pamby normal bars piggybacking on it for purposes of scale: 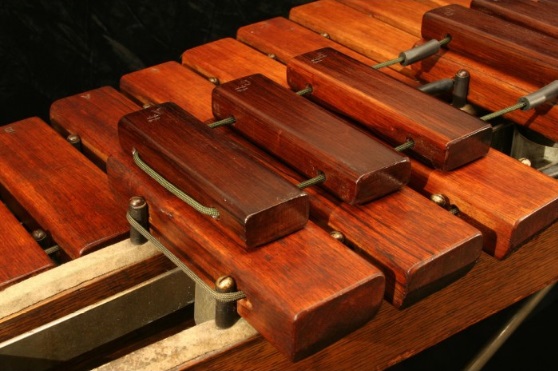 Image from here, and thanks to Scott at Olympic.

It was originally developed for xylophonist "El Cota" (known to his mother as Lawrence Albert Coates):-- 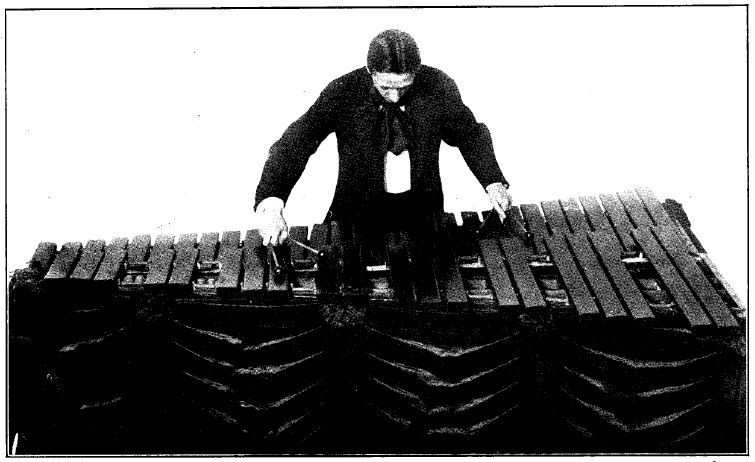 But not every piano is a Steinway D, and the ones that aren't Steinway Ds are still pianos. Most xylophones are not like the Deagan De Luxe, but they are still xylophones. Consulting Deagan catalogues (as you can do at the Deagan Resource) you find that on most of their models bar width varied between 1 5/8" and 2" (41 to 51 mm) and bar thickness was usually 7/8" or 15/16" (22 or 24mm, give or take).

Quint tuning  Nobody tuned any overtones on xylophone bars until about 1927, when the head tuner at Deagan, Henry Schluter, introduced quint-tuning (fixing the first audible overtone at a twelfth above the fundamental of the bar).

(At least that's what I've read. I haven't had the opportunity to check it for myself. Someone please send me a prewar Deagan to repair.)

It can't be said that this innovation immediately became the rule. All modern xylos have (some of) their overtones tuned, but they are by no means all quint-tuned. I've heard that the majority of European instruments are octave-tuned. On old(ish) instruments I've examined (Premier, Bergerault) the only intentional overtone tuning was octave tuning, and it really didn't extend very far.

Paul says "octave tuning just sounds wrong – a xylophone has a jarring sound, that is what it is for musically" Hmmm. Schluter was trying to make the sound sweeter; if perceptible overtones are accurately tuned you minimise clashes between the fundamentals of high bars and the overtones of low bars. Suppose a bottom F has a prominent overtone that is 40 cents sharp to the C a twelfth above, this may make a triad on F rather more piquant than is desirable. But whether you align that overtone to a twelfth or to a double octave -- consonant intervals both -- doesn't seem to me to make a great deal of difference. There is certainly a difference in sound between quint-tuned and octave-tuned instruments, and I wouldn't disagree if you told me that octave tuning is blander. But either way you are no longer in the wildwood where the jarring cry of the xylophone rings out from its hidden nest in the undergrowth. If you want the true wild xylo untamed, leave its overtones untuned.

NB I doubt Schluter chose quint tuning over octave tuning for aesthetic reasons. Given the basic design of the instruments he was working with it may have been the most obvious solution. I may discuss this in a future post.

No padouk thank you Current practice is pretty uniform across the industry. Professional-level instruments have keyboards of honduras rosewood (Dalbergia stevensonii); the universal second choice, for entry-level and student instruments, is African padouk (Pterocarpus soyauxii). For the manufacturer padouk has various advantages; it is inexpensive (for a tropical timber), it is widespread and not endangered, and it comes from whopping great trees that provide great chunks of timber with straight grain and consistent density, easily machined into quarter-sawn bar stock. All of which would be beside the point if it sounded terrible, but actually it sounds pretty good.

I don't know when padouk ascended to the number two slot. In my workshop I have a random selection of bars from trashed instruments that I've picked up here and there. I'd guess some of them date back to the 70s and 80s, but some could be considerably older. None of them are padouk. The ones which aren't rosewood tend to be made of woods I can't identify, but which look and feel more like african or far eastern "mahogany".

Padouk is considerably less dense and less hard than rosewood. Density and hardness are not particularly correlated with musical virtues (many woods are close to rosewood in density but sound hilariously duff) so this is no great surprise, but as Paul Jefferies points out, padouk will not be as durable. However it is "good enough" for the job, unless you want to serve only the most demanding and discriminating customers, not necessarily the best way to succeed in the music biz.

As for the situation in the early 20th century ... Deagan used honduras rosewood and cocobolo ("Nagaed" and "Klyposerus" in Deagan-speak) from ... well, I assume from their earliest models. But I wonder if rosewood was so promptly adopted in Europe, where after all xylophones had surely been constructed of local temperate timbers for centuries.

I would hazard that the xylophones of Saint-Saens, of Strauss, Stravinsky and Janacek, the xylophones recorded on the earliest cylinder recordings, most likely

-- were not made of well-seasoned top-grade rosewood (and weren't constructed in climate-controlled environments with computer assisted tuning).

Oh, and they probably didn't have any resonators.

So having picked holes in Paul Jefferies' views, I just have to add that actually, I agree with him and think he is absolutely right. Because after all

Xylophones are not piccolo marimbas

Looking through the Deagan catalogues we find a wide array of models varying in range, pitch and designation. Xylophones, marimbas, marimba-xylophones ... 3 octave, 3.5 octave, 4 octave, even 5.5 and 6 octave instruments (though no images seem to exist of these, quite possibly they were never built) .... Competitors followed the same path, with Besson providing Teddy Brown with a 5 octave xylophone, Leedy producing a 5 octave "marimba xylophone", and Premier and Bergerault offering "xylorimbas".

However although these fossil organisms crop up in the deposits with bewildering frequency, evolution seems to have left us with the two fittest species; the 4.3 or 5 octave marimba, highest note C7, and the 3.5 or 4 octave xylophone, highest note C8.

Organologically identical (wooden, idiophonic, mallet-struck, with aerophone resonators, Sachs-Hornbostel class 111.212) the musical community has accepted the two instruments as distinct voices; one high, one low; one bright, one mellow; one is dancing skeletons, the other the voice of the forest.

It is interesting (but not surprising) that such a simple thing as shifting the pitch centre by an octave should have such considerable effects. Perhaps it is slightly surprising that the development seems to have taken so long, as what now seem to be central characteristics of the marimba -- a graduated keyboard with wide bass bars, extension to low A, then C -- didn't become canonical until quite recently.

And the more like a marimba the marimba becomes, the more the xylophone has to remain, defiantly, a xylophone.

Which is why I have decided to dedicate a batch of old stock rosewood to making an honest, chunky, traditional xylophone. Here is the bar stock waiting to be drilled and tuned... 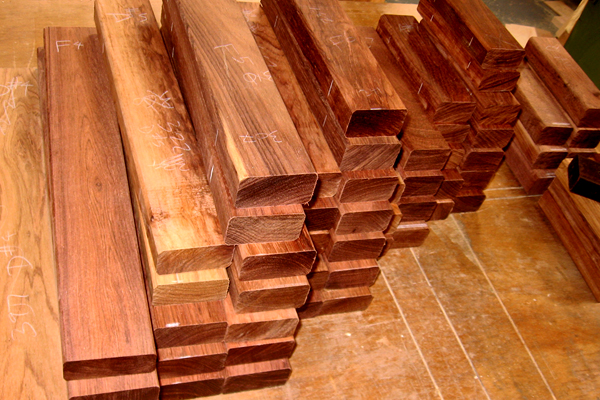 It's not quite De Luxe, but it is definitely old school. As far as I know, no one but  Malletech makes a xylophone with bars this size any more. Come back to check out my progress ....

I'm not sure if I've answered the original question. What is a xylophone? Well, it's not a marimba. Any other answers?

3 thoughts on “What is a xylophone? — Part Two”